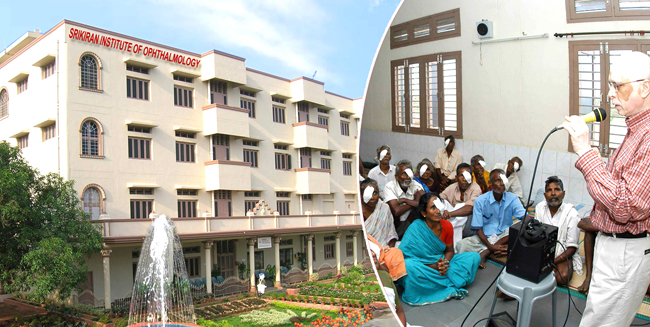 “Sirikiran Institute of Ophthalmology has so far treated 3.8 million (38 lakh) plus outpatients and has performed over 325,000 cataract surgeries of the total surgeries 90% are completely free for poor and needy.”

India is the most populous nation in the world with a dubious distinction of having the most blind. To alleviate the blindness problem on a small scale, Sankurathri Foundation (SF), an NGO in India, with support from another NGO, Manjari Sankurathri Memorial Foundation (MSMF) of Canada started Srikiran Institute of Ophthalmology (SIO) in the suburbs of Kakinada, East Godavari District, Andhra Pradesh, India, in 1993.

Blindness has a great negative impact on the person’s self-esteem and also affects economic production of the country. Around 19 million people in India today are blind, most of them trapped in poverty. Yet, in eight out of ten cases, blindness can be prevented or treated with proven, cost effective interventions. In addition, there are 180 million with refractive errors who needs service.

These eye care problems are due to the lack of sufficient ophthalmologists, eye hospitals, and trained medical and paramedical personnel. This problem is more severe in the rural areas because of lack of awareness about eye and its problems and these areas are inhabited by nearly 70% of the population. Now, Srikiran provides outpatient services to 750 people a day and performs about 80 surgeries per day. The Institute provides quality eye care irrespective of their paying capacity and no patient is denied treatment for not being able to pay for treatment. Srikiran Institute of Ophthalmology, Kakinada has been working with poor and downtrodden by restoring eyesight by performing free cataract surgeries. During the last 30 years provided quality eye care services to more than 3.8 million people (65% free to poor) from four Districts of Andhra Pradesh. Restored eyesight to more than 325,000 blind people, among them 90% are provided free of cost to poor and needy.

As of now, Srikiran eye hospital is the biggest chain of eye hospitals with one tertiary eye care Centre, four surgical centers and 10 primary eye care centers, thus making a total of 15 serving a population of 10 million.

All these achievements were possible because of community support, philanthropists and few corporations.